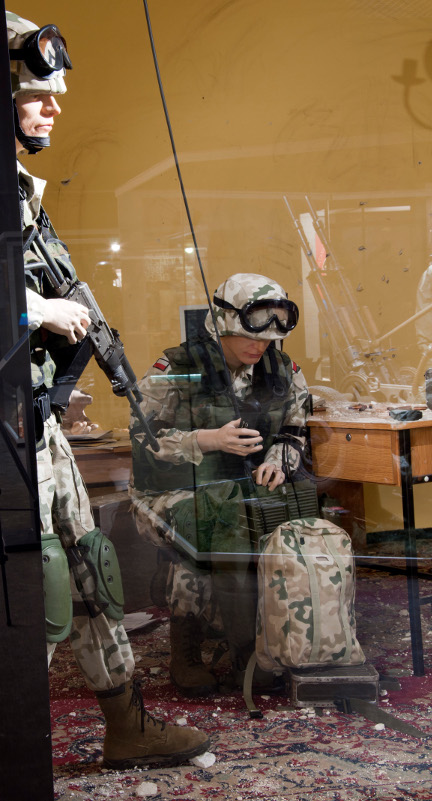 Since the Second World War, the Polish Army, equipped mainly with gear of Soviet origin, was changing when it comes to the number of soldiers and the armaments used. As the army structure was changing, its stalinisation and ideologisation was increasingly deeper. The foundation of NATO (1949), the Korean War, conclusion of the Warsaw Pact (1955), and the progressing arms race have led to the increase in the strength of the army to 350 thousand soldiers. It is under the Warsaw Pact that Polish soldiers participated in the armed intervention in Czechoslovakia in 1968 (Operation “Dunaj”).

After demobilisation and conversion into a peace-keeping organisation, military districts were created; in November 1977, Land Force Command was temporarily established. Infantry divisions were transformed into mechanised and armoured divisions; the entire armed forces started to be trained in terms of the response in case a weapon of mass destruction was used. Since the mid-1960s , the equipment of the Armed Forces of the Polish People’s Republic was richer with missiles, including those able to carry a nuclear weapon.

The first showcase (20) presents exhibits from the late 1940s and early 1930s , when armaments and equipment of the Polish Army dated back to the times of the Second World War. Beside the two summer uniforms, you can see a SG 43 heavy machine gun on a wheeled mount and an ammunition belt loader. The very characteristic arms of that times are represented by Polish 7.62 mm submachine gun model 43 PPS, model 43/52, and RG 42 and RPG 43 training grenades. Our attention should be drawn by items used in staff operations and for mathematical calculations during artillery fire: chord-measuring tool for determining distances on maps, pencils, a military artillery circular model 1944, and a slide rule. Compare the ebonite dog tag with the one from the war – no serious modifications had been made.

The next part of the showcase (21) contains the unique collection of camouflage uniforms, “Ameba”, “Pietrucha”, and based on the German camouflage clothing – “Splitertarn”. Beside, there is a figure of a soldier from the 6th Pomeranian Airborne Division with parachutes: D-5 main parachute and Z-5 reserve parachute; the solider is armed with an AK assault rifle featuring a metal stock. Among the presented arms, the AK assault rifle with an NSP-2 night vision sight and the RKM D 7.62 light machine gun manufactured in the Radom Arms Factory clearly distinguish themselves.

Further (22) you can see figures of a soldier in a safety uniform designed to be worn when operating the LPO 50 flamethrower and a sapper wearing a camo fatigue and a lifejacket. Below, there are a SVD 7.62 semi-automatic sniper rifle with a PSO-1 telescopic sight, an AKM 7.62 assault rifle with an NSP-3 passive night vision sight and a PBS-1 silencer, as well as a Strela-2M 9K32M anti-aircraft system. What you may also find interesting is our collection of anti-personnel, anti-tank, scatterable, and anti-transport mines. Beside, you can see a helmet model 31/50, the shell of which was derived from helmet model 31, used by Polish soldiers during the interwar period, while its interior and coating were made after the war.

The last part (23) of the showcase demonstrates a uniform of Colonel Stanisław Dzida, a soldier from the 14th Infantry Regiment of the 6th Infantry Division, a chevalier of the Order of Virtuti Militari, a victim of Stalin’s persecution. Beside, a white uniform jacket model 51 of Division General Zygmunt Huszcza, a commander of the Pomeranian Military District, and a post-war uniform of Colonel Wojciech Gniadka, a soldier of the 62nd Infantry Division. What you may also find attractive is a rubber dummy of AK rifle and entrenching tools designed for exercises in military self-defence systems. Further, you can see an official sabre of the Polish Army model 1976. The showcase also contains a 6H4 bayonet for AKM and AKMS rifles, a training bayonet model 85, and a knife model 55. Note also the exhibits related to everyday life of soldiers during exercises: an essential kit, food rations, and a canteen model 31/50, based on pre-war canteen model 31.

After World War II, there was a high risk of an armed conflict with the use of weapons of mass destruction. The Polish Army was preparing for this eventuality during numerous staff games and field exercises. The 14.5 mm large-caliber anti-aircraft machine gun PKMZ-2 protects the decontamination point during exercises of the Polish Army. Staff armed with 7.62 mm automatic rifles AK, dressed in protective suits, OP-1 and OP-1M use the SzM-41 gas masks. A soldier of chemical troops, armed with a 9 mm PM 63 “RAK” submachine gun, checks the area with a DP-66M X-ray radiator with a probe.

Polish Armoured and Mechanised Forces after the Second World War

Many changes have taken place In the Polish Army after the Second World War. It is best illustrated by an example of armour. Polish army initially used T-34/85 tanks, then they changed into T-55, T-72, and in the recent years into PT-91 and German 2A4 Leopards. Infantry divisions were converted into mechanised divisions and the BWP-1 became their main vehicle.

The showcase (24) illustrates the evolution of tank crew uniforms: from cheviot through leather to drill uniforms. The collection of Polish tanks contains various types of cartridges used in Polish tanks. Among them, a BK-14M calibre 125 mm HEAT for the T-72 tank stands out with its shape. On-board tank armament is represented by DT and PKT 7.62 tank machine guns with an electric trigger. Beside, you may see a PM 63 “RAK” 9 mm submachine gun used by Polish armoured vehicle crews.

Changes occurring in Poland after 1989 also affected the Land Forces. The army was reduced and reorganised, and then professional army was established, which strengthened its fighting potential.

Since 1953, Poles have been continuously serving under the UN flag in the most tense regions of Africa, Asia, and Europe. So far, soldiers of the Land Forces has participated – or still participate – in more than 80 peace, observation, training, police, and humanitarian missions. Since 2003, they have been a member of an anti-terrorist coalition in Iraq and Afghanistan.

The showcase (27) starts with two uniforms of Polish soldiers from the UN missions in Syria. You can also see various military headgear – from berets to helmets – of many different peace missions. Among them, the American M1 helmet liner in UN colours, commonly used due to its low weight, deserves our attention. The remnants of armed actions, such as the fragment of a BM-21 missile fired from an improvised rocket launcher and the fragment of an improvised explosive device, found by the Polish UNIFIL soldiers in Lebanon, may give us some idea of the hazards that soldiers participating in peace missions in the Middle East have to face.

The second part of the showcase (28) displays the uniforms of further international missions of the Polish Army. You can see a “Pantera” 93 camouflage uniform of Polish Military UN Contingent in Bosnia and Herzegovina and a uniform model 124Z of Warrant Officer Piotr Ochociński used during the 25th Change of Command of KFOR in Kosovo, a uniform of Corporal Michał Sobieralski from the 18th Airborne Battalion, used during the 5th Change of Command in the Polish Military Contingent in Afghanistan, and a Polish uniform model 124 with the mark of the 2nd Change of Command in Iraq. Another interesting exhibit is the famous pack of cards showing Saddam Hussein and his closest collaborators, used by Allied soldiers for quick identification of wanted persons. Beside, you can see equipment of Polish soldiers participating in stabilisation missions: military suspenders model 988/MON, customarily called “Lubawa” after the manufacturer’s name, and a Polish OLV bulletproof vest shot repeatedly with an AKM rifle.

The pieces presented at the exhibition come from the collections of:

The iconography presented at the exhibition comes from the collections of: