Garrison life in its broad sense was an important part of military service. It included training, time spent in barracks, and spare time during leave of absence. Remember that military buildings constituted a significant part of urban architecture during the interwar period. 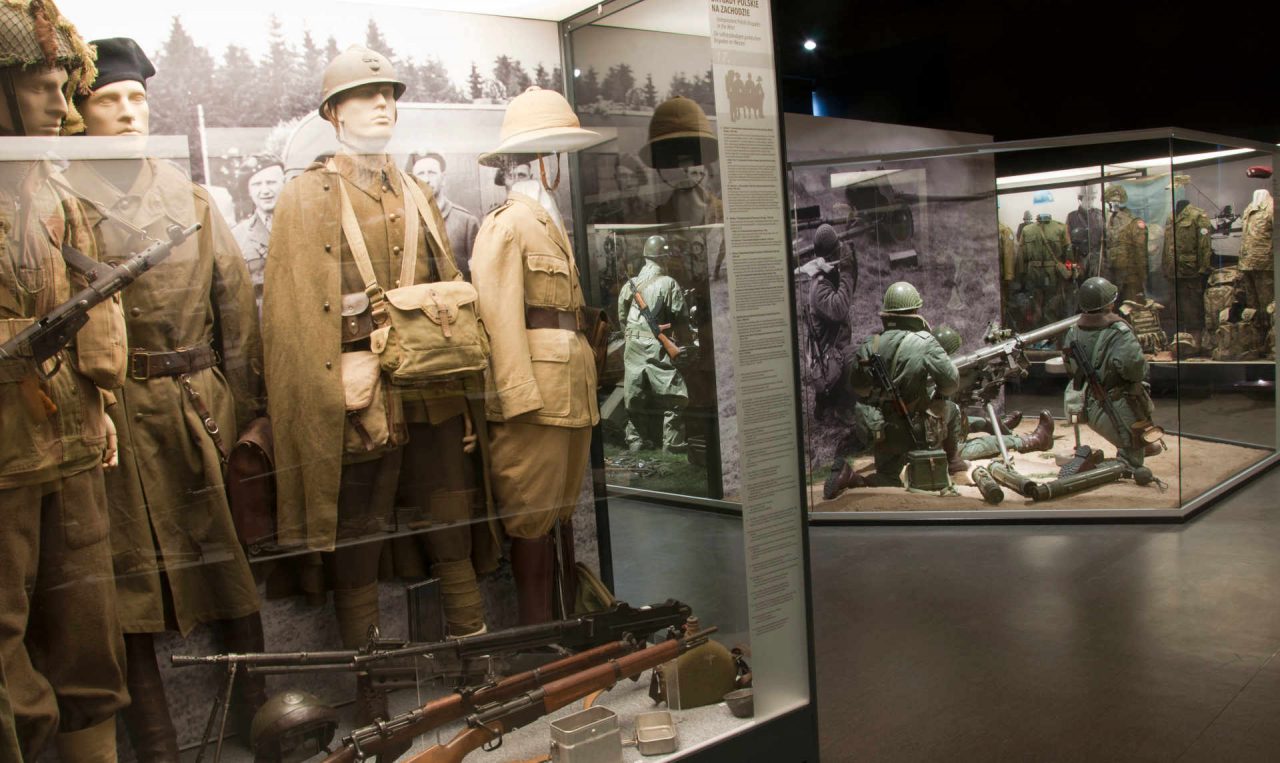 The showcase (8), connected with the Bydgoszcz garrison, contains a uniform jacket of a master sergeant of military police and a replica of a Uhlan’s uniform from the 1930s . The showcase is complemented by museum collection connected with Polish cavalry: French sabre Mle 1822, Prussian sabre of field artillery M 1864, and four Polish sabres, including the famous model 34, which is considered the best sabre of that times. The showcase also demonstrates a cavalry lance and Polish cavalry saddle. On the travel chest, you can see some of the tableware of the 61st Infantry Regiment stationed in Bydgoszcz. The collection of Polish bayonets for Mauser rifles, as well as caps and forage caps worn by Polish soldiers are also worth attention. We also present two boards: one from the building of the 8th Armoured Battalion and the other from the barracks of the 18th Uhlan Regiment of Grudziądz.

On 1 September 1939 at 4:45 am, without any declaration of war, Germany carried out an armed assault on Poland. Despite having less arms and equipments at their disposal, the Polish Army mounted fierce resistance at the beginning. As another aggressor – the Soviet Union – joined the war on 17 September, the outcome was already doomed. Fierce fights lasted until 6 October 1939, when the Independent Operational Group “Polesie” commanded by Gen. Franciszek Kleeberg capitulated.

In the showcase (9), you can see a figure of Sergeant Eugeniusz Pokrowski, a commander of the heavy machine gun company of the 21st Infantry Regiment. There are also a collection of gas masks, a fragment of a bandolier of the 16th Uhlan Regiment excavated after the war, and a dog tag of Private Antoni Soroka from the 35th Infantry Regiment, who fell in the village of Rytel. The real pride of the collection is a “Mors” model 39 number “13”, a Polish 9 mm submachine gun (only 39 pieces were produced) , and a 7.92 mm Polish anti-tank gun model 35 “Ur”, which is in a perfect condition. Have also a closer look at the Polish helmet model 31 coated with a characteristic anti-reflective paint named “Salamandra”.

The second part (10) of the showcase contains uniforms of Major Jerzy Hryniewicz, a sapper, a shelter builder at the Bydgoszcz bridge-defence position, and a gunnery sergeant. Among them, you can see a fragment of a track of Polish TK tankette and a collection of projectiles and bombshells used in Polish guns. We would also like to direct your attention to the grenades used by the Polish Army: defensive grenade model 33 and offensive grenade model 24. Beside, you can also see two Browning machine guns manufactured in Poland: a hand-held machine gun model 28 and a heavy machine gun model 30.